Last week, we were in Burma/Myanmar. Myanmar is the official name of the country, but the United States and a few other countries still call it Burma due to how the military rule changed the name without the country’s input and their past track-record in human rights. This is also what the pro-democracy groups in the country prefer as well. So, that’s what we’ll call it.

While traveling, a word that you hear thrown around a lot is authentic. “This place is so authentic.” “Ugh, that tour was so inauthentic.” I’m sure everyone has their own exact definition for what this means; but to me it comes down to how much has a place adapted to cater to Western (and the rapidly increasing number of Asian) tourists. By that standard, Burma was, by far, the most authentic place we’ve visited.

This is largely due to the ruling military junta’s decades of isolating the country from the world. Over the last few years it has started to open up to the world, as well as introduce democracy through baby steps. A New York Times article from 2012 talked about the authenticity of Burma by saying,  “Nobody there knows that they should be selling you a T-shirt.”

While that has changed, slightly, we were blown away by how different the country was from our other experiences. In Indonesia, you would find traditional dress usually just in the villages and smaller towns, or for ceremonies. The cities we frequented were filled with people wearing Western clothes and adhering to Western fashion norms. In Burma, though, the cities were filled with men and women wearing sarongs, men chewing betel nuts and tobacco (and the blood-red spit that accompanies it) and women wearing thanaka – a golden colored powder from ground bark – in place of makeup.

A woman we met. Click the picture for a closer and you can see the thanaka on her cheeks. For others it was much more prominent on their cheeks and forehead.

Our trip began with two days in Yangon (formerly, and more commonly, known as Rangoon) where we toured the two most famous pagodas in the country and gorged on cheap street food. Our experience was that English wasn’t widespread in Yangon, so there was lots of pointing and miming and sometimes the Burmese person just picking something for us; but it always turned out perfectly. For dinner on our first night there, we saw a street hawker with some delicious looking satay. Through miscommunication we ended up ordering two of everything he was making which included a salad, a soup and some fantastic Indian bread, in addition to the satay. We couldn’t have made a better mistake and it was wonderful. It didn’t hurt that it cost us less than five dollars, too.

Closer view of the Sule Pagoda 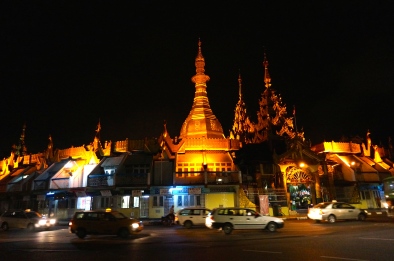 The Sule Pagoda at night. It actually sits in the middle of a traffic circle.

The much bigger Shwedagon Pagoda

At the Shwedagon Pagoda. An interesting thing we saw in Burma that we didn’t see elsewhere–the use of the LCD lights around some of the Buddha statues.

Statues within the Shwedagon Pagoda complex

More from the Shwedagon Pagoda Complex.

The following night, we boarded an overnight bus to Bagan, more centrally located in the country. The bus was…interesting. It was super comfy and felt pretty safe. We made stops for the bathroom and food three times during the eight hour trip. The weird part was the movie they chose to show. I have no idea what it was; but it seemed to be based on zombies. There was nudity, incredibly gory violence and no sound. An odd choice for a bus full of strangers, which included children.

Once we arrived in Bagan we were in awe of what we encountered.

A very abbreviated backstory: about 1,000 years ago there was a king who ordered the construction of thousands of Buddhist temples, stupas and monasteries. Over the course of three centuries more than 10,000 were built in a relatively small area. Today there are still more than 2,000 standing.

As we walked and rode electric bicycles, we would pass them by the dozens and we could stop and explore. The bigger temples had hawkers selling food and souvenirs (like I said, things have changed slightly since that NYTimes article was written); but the vast majority were just open for individual exploration. We would stand in a field and see hundreds of temples without seeing another human. It was incredible and the photos below do it no justice. Make sure to click to see large versions on some of the zoomed out shots, you’ll see many temples dotting the plains. 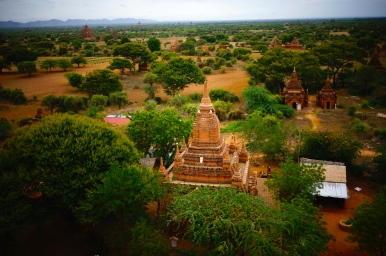 Check out all of those temples!

These Burmese monks asked us for our picture, so we got one in return.

We felt much cooler riding these things than we looked 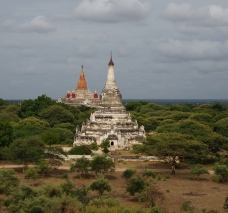 After two nights in Bagan, we returned to Yangon for a night before returning to Kuala Lumpur. Without debate, we both agreed that Burma was the highlight of our travels. So, if you are looking for a little adventure and a whole lot of authenticity, GO! NOW!