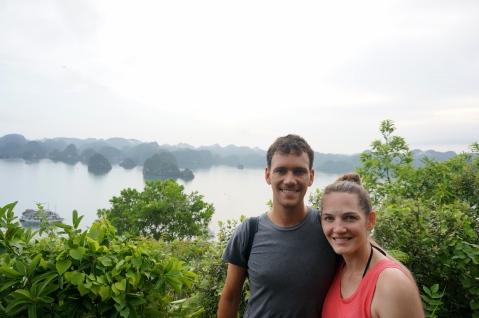 When Will and I were researching our trip to Vietnam, we quickly realized how inexpensive it was to purchase tours to get around. As part of our weeklong package via our hotel in Hanoi, we purchased a trip to Halong Bay and to Sapa.

Halong Bay is a UNESCO Wolrd Heritage site and is made of up thousands of limestone karsts and isles. It’s stunningly beautiful and we spent the night there (to our pleasant surprise) on a rather luxurious boat. 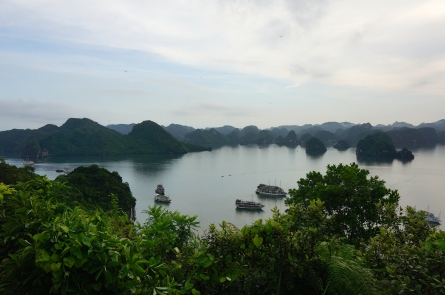 That isn’t a landmass in the distance, just more of the same formations you see in the foreground

Our tour picked us up from our hotel in Hanoi on day one, and, along with our group of about 12 other people who we really enjoyed getting to know, we drove about four hours down to Halong City where we immediately got onto a boat despite the pouring rain. 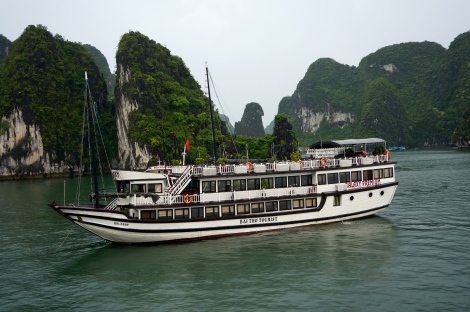 We checked into our cabin which was very neat and spotless and then proceeded to lunch in the dining room as we zoomed by the limestone karsts outside. The rain let up quickly and we loaded onto our tender and motored out to one of the caves that you can find in the many hollow islands. We visited the “Surprising Cave.” I was a little skeptical about this big “surprise” but the cave was a series of caverns that became bigger and bigger as you kept going. The last one was huge and reminded me a lot of Mammoth Cave in Kentucky. Though the cave was lit up with multi-color lights, and they especially loved highlighting the features that most resembled human genitalia, we still found it impressive. We then went to another island where we were able to climb stairs to get a great view of the Bay. After climbing back down we spent about an hour or so swimming on the beach. 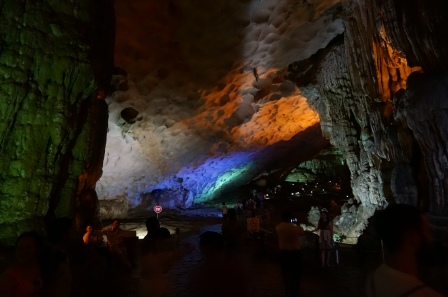 Other notable events during our time in Halong Bay included kayaking, a couple getting engaged on the boat, an adorable teenager turning 15 and meeting lots of interesting people from all over Europe and Australia. 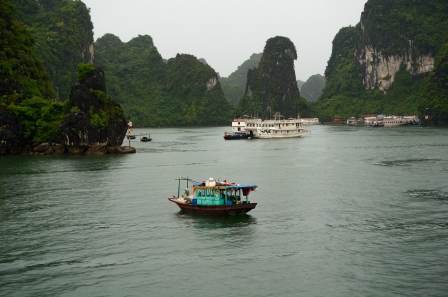 Next on the itinerary was a trip to Sapa in Northern Vietnam. We were dropped off at our hotel after Halong Bay, showered, ate dinner and then headed to the train station for an overnight train to Sapa.

We arrived at Sapa in the morning, checked into our hotel, ate breakfast and were met by our tour guide. Along with 12 other tourists and about eight local Hmong women we started out on a 12 kilometer walk through the terraces of the Sapa area. 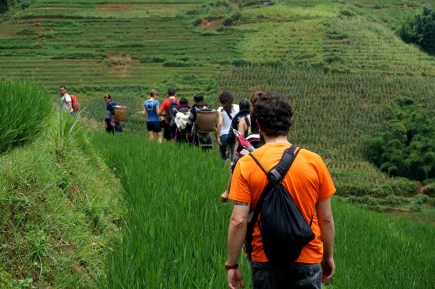 Our group hiking through the terraced rice fields.

Apparently hoards of Hmong women ride up to Sapa town on motor bikes in the morning and find a tour group to walk with. They help you get through the slippery areas and many of them speak English really well, so we were able to ask a lot of questions about things like their daily lives, education in the villages and agriculture. Of course we were fully aware that once we arrived at their villages they’d want to sell us some of their woven handicrafts, and of course we were more than happy to buy them. In my view, they spent the entire morning hiking with us, and they opened their village and lives to tourists so it was the least we could do. 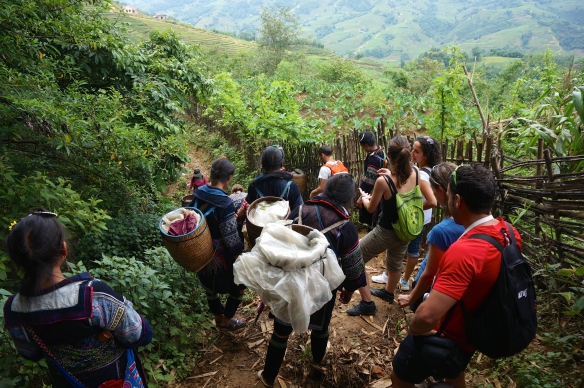 Our group with the Hmong women on the left

We really enjoyed the town of Sapa as well and it turned out to be a surprisingly fun little town. It reminded us of a ski village. There were lots of local and Western restaurants, cool coffee shops, stores to buy (knockoff) Northface gear and hiking shoes, cheap massages (we got two foot massages after our hikes!), boutiques and the weather was very pleasant compared to the heat of Hanoi. We would have loved to spend a few more days there, but our tour was almost over. On our second night there, we headed back to the train station for another overnight train to Hanoi. 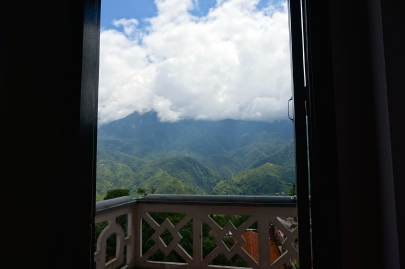 The view from our hotel room. Seriously. 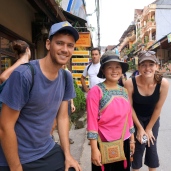 With our trekking guide.

Some boys in the Hmong village.

These tours allowed us to see so much in such a short time, and even though we were worn out at the end we had a blast and met lots of interesting and fun people. 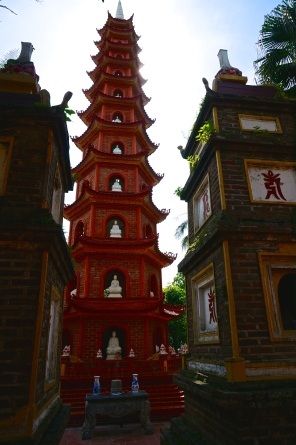 First, an update on our travels: Before leaving for Vietnam, we received an email from AirAsia telling us that our flight to Nepal was cancelled. We should have been there this past week, but due to issues with rescheduling, we had to scrap it from our trip. We were disappointed, but it gave us a chance to visit Saigon, as well as fly to Singapore to meet Amy’s cousin who lives there and spend a few nights checking out that amazing city. Tomorrow we leave for Myanmar for six days and then we’ll return to Kuala Lumpur for our last week before heading home.

Two weeks ago we arrived in Hanoi. We weren’t sure what to expect, but it was essentially the epitome of chaos. A 1,000 year old city, swamped in motorcycles and cars on streets that were designed well-before the invention of either. It was overwhelming at first, but we really grew to appreciate its character. 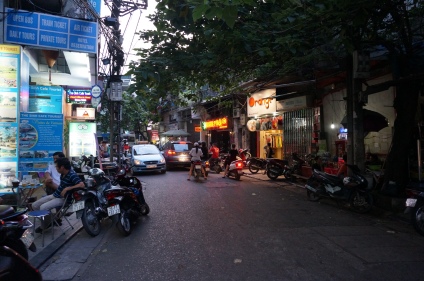 A less crowded street, but you can get an idea of the size of the streets from the two cars trying to pass each other.

We stayed in the Old Quarter of the city where the streets still follow the same layout that they’ve followed throughout the city’s history. Certain streets sell certain things. So, if you are looking for clothes, you head to that street. Fabric? That’s another street. It was cool to walk around a bit lost on those streets and take in the sights, sounds and smells…all of which usually involved delicious pork.

We took a city tour, which was really great. The heat was oppressive in Hanoi, so without the tour, I don’t know that we would have ever gotten out during the mornings or afternoons to see the sights. We saw some of the city’s more famous pagodas, the grounds of what is (arguably) the world’s first university, Ho Chi Minh’s mausoleum and the government complex that included the houses he lived in while he served as president of the North Vietnamese. On the note of Ho Chi Minh, obviously the history of Vietnam and the United States was impossible to ignore, and we heard several references to it, but we never had any interactions that were less than friendly. Most people who heard we were Americans would just say something along the lines of, “Oh, we are friends now!” 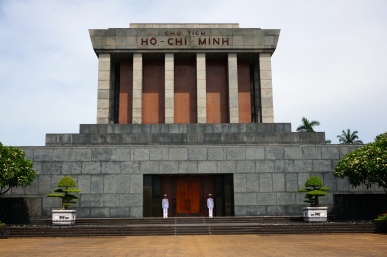 The symbol of Hanoi, a structure within the Temple of Literature, one of the world’s earliest universities 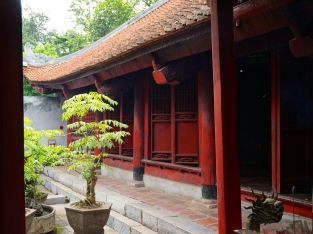 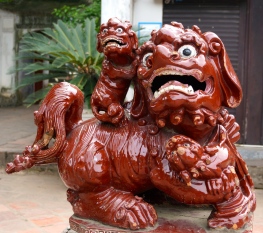 I loved this statue.

Aside from our day around the city and roaming around the Old Quarter, the other notable thing about Hanoi was the beer. Everyday, beer is brewed fresh and in the evenings it is sold for 25 cents a glass! The already crowded streets become absolutely packed as stools are taken into the road to accommodate all of the socializing that seemed to take place every night. 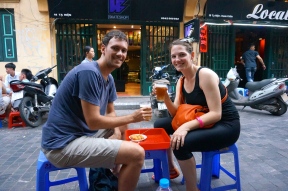 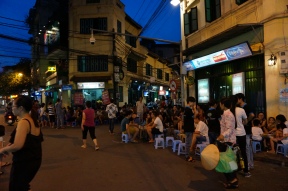 The stools are creeping into the street. In a few hours there would be three or four times this number!

Following two nights in Hanoi, we took trips to Halong Bay and Sapa, which will be detailed in the next post. After Sapa we returned to Hanoi for another night before flying to Saigon, or Ho Chi Minh City.

Saigon is very different from Hanoi in that it is more of a bustling metropolis with wide streets and tall buildings. Our time there was a bit more relaxed as we enjoyed the more modern city, taking in a movie and drinks at a cool bar on top of the city’s tallest building. 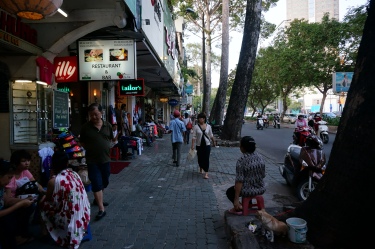 You can see there is actually a sidewalk here in Ho Chi Minh City!

We had so much success with the city tour in Hanoi, we decided to arrange one in Saigon as well. There aren’t quite the same number of sights, but we saw some interesting places like a cathedral that had all of its materials shipped from Europe in the 1800’s and a post office designed by Gustav Eiffel. 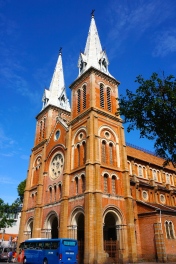 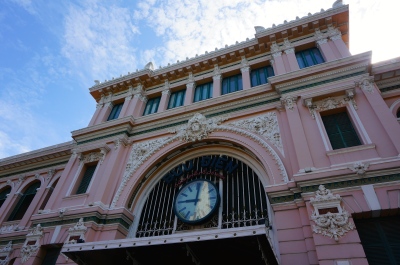 Next we saw what definitely ranks highly on the sights of our entire trip, the Reunification Palace. This was the palace of the President of the South Vietnamese and remains in the exact same shape as it was when Ho Chi Minh’s armies busted through the gates in 1975. Other than cleaning and renovation for tourists, nothing else has been updated. Its like a time capsule and we kept expecting to see Don Draper walk through one of the rooms at any moment. 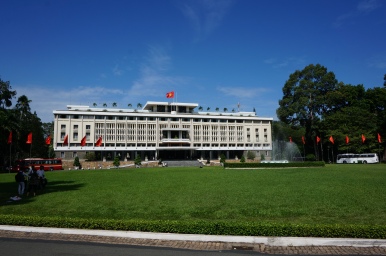 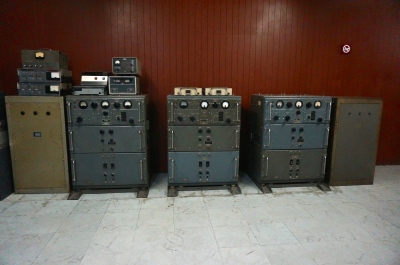 Communications equipment in the basement 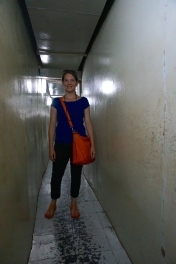 The tunnels in the bunker below the palace

Next we visited the War Remnants museum, which was a tough place to visit. It is about the Vietnam War with a fair amount of bias to the displays. Regardless, it was interesting to learn about the war through that perspective and to revisit many of the sad atrocities that occurred during the war.

On the same day we took this tour, we had a number of interactions with Kentucky! While touring the Reunification Palace, I saw a couple walking in front of us that caught my eye. The man was wearing a t-shirt that had John’s Running Shop on the back and he was carrying a bag imprinted with the word “y’all”. We asked if they were from Kentucky and they said that they had been living in Lexington for the last year. We exchanged email addresses and hope to catch up with them again once we’re all back home. While at the War Remnants museum, there was an exhibit about war photographers that had been donated by the Commonwealth of Kentucky. Later that night, as we were touring a market full of knock-off goods, we came across some UK shirts. As the end of our trip nears, we are becoming more excited about our next move back home!

The views expressed on this blog are our views only and do not represent the views of the United States Government or the Peace Corps.